Many of our clients have been asking about how to improve bone density. This is a good concern, as many middle age women are at risk for, or already have, osteoporosis. But this isn’t just a concern for women, as men can also have osteoporosis. Think you can tune out because you haven’t quite hit middle age? Think again young-ins.

Many studies show the most significant impact we have on building bone density is during your adolescence and young adulthood, and we reach peak bone mass between 25 and 30. For older adults, don’t think it’s too late, there is good Several studies have shown post-menopausal women in their 60-80s were able to increase bone density in response to exercise. 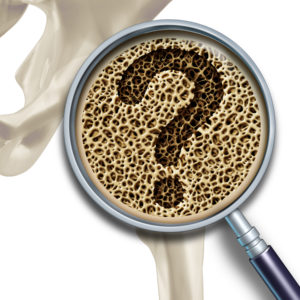 Most concerned about bone density are focusing on improving their T score, but let’s not lose sight of the major issue. All of this bone density concern is really about one thing: reduce fractures. How do fractures mostly happen? They happen with falls. So what are the biggest factors related to falls? Strength, poor balance, cognitive decline, multiple medications, and fear of falling amongst others. Guess what one thing has the biggest impact on reducing the risk of falls, or at least improve the other factors? Resistance training! The higher the intensity and more dynamic, the better it will address all of the above factors.

Treatments that have shown to improve bone density or prevent/minimize the loss of bone include: Hormone replacement therapy, resistance training, and supplementation with calcium and vitamin D (only in combination with exercise) all have shown to be effective.

See the common theme? It’s resistance training. No matter what, resistance training must be part of your strategy if bones are in anyway important to you because it is not just about improving a test score, it’s about the function, as well.

What type of resistance training?

Clearly we need to focus on resistance training to affect bone mass. As our clients already know, you might realize that not all resistance training is created equal and you know that the dosage can be quite variable. Accordingly, it’s tough to find research to tell you exactly what works best.

Being a nerd, I’ve scurried through it all and found a few great studies that give us some answers. In the early 90s, researchers at Tufts showed that older adults, including frail folks in their 80s and 90s, were able to not only tolerate, but thrive on high intensity weight training, destroying the myth that high load activity was too much for brittle older adults. (Fiatarone, MA, et al. N Engl J Med 1994) This was influential in laying the groundwork for exploring the effects of higher load activity for older adults.

Given the variable responses reported in the literature for exercise increasing bone density, researchers at Arizona State in the early 2000s constructed a well-designed study to test different types of exercise in combination with other treatments (supplementation and hormone replacement therapy) and found that high intensity exercise combined with HRT and calcium supplementation had the best effect on improving bone density. 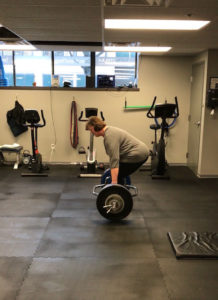 Interestingly, the study also found that only doing high intensity resistance training and supplementation also produced significant improvements, and weren’t significantly different from the group that had added HRT (Metcalf, et al ACSM’S Health and Fitness Journal, May/June 2001). This is important because it provided a rationale for those who were adverse to or unable to use HRT, they had a viable option for increasing bone density without it.

A meta-analysis showed that for all populations, resistance training at least attenuates the loss of bone density, and at best actually increases the amount of bone density. The trends also showed that high intensity (70-90% of maximum) was required to make this improvement (Zhao, et al. Osteoporos Int. 2015 May).

Another excellent study revealed even more clarity for what type of training should be done. Participants were females, average age of 68 with bone density T-scores less averaging –2.6 (very low bone density). One group did 5 exercises, 5 sets of 5 reps, at 80-85% of their maximum, which included dead lifts, squats, jumping chin-ups/drop landings, and overhead presses all under supervision 2x/week. The other worked out at home doing lunges, calf raises, delt raises, standing shrugs, balance exercises, and 15 minutes of walking 3x/week.

A more recent study continued to show that resistance training is vital in improving bone density for young and older adults, and at worst can prevent the degree of bone density loss in older, frail adults. (Hong, et al. Endocrinol Metab (Seoul). 2018 Dec)

The consensus is clear: you must load your bones, and daily activities outside of resistance training are not enough.

So what does this all mean?

What if you can’t lift heavy?

If you are weak, less load is required to stimulate the bones and muscles. The key point is that the bones must be stimulated closer to their maximum ability. It takes a skilled pro to determine what that load is and if you are in pain, it’s important to resolve it quickly instead of hoping it goes away so that the problem isn’t compounded by allowing bones to weaken as well.

Also, keep in mind that loading other bones is possible even when the painful body part temporarily can’t be loaded. For example, if your right knee is painful, you can still load the hip, as well as the other leg, the spine, and arms. Don’t fall into the “all or nothing” trap when you are in pain.”

Have concerns about your own bone density and need help improving it? Click here, we can definitely help you out!